Follow your Passion episode 37 – Don’t be precious, just do it, Jennifer Lieberman

“Don’t be precious, just do it” – Jennifer Lieberman

Please welcome my guest Jennifer Lieberman. After years of pounding the pavement and knocking on doors with no success of breaking into the entertainment industry, Jennifer decided to take matters into her own hands and created the solo-show Year of the Slut. This show proved to be her break and the play went on to win the Audience Choice Award in New York City and is now the #1 Amazon Best Selling novel Year of the What? and was awarded the Gold Medal at the 2022 Global Book Awards for Coming of Age Books and the 2022 IPPY Bronze Medal for Romance/Erotica Ebooks.

Since deciding to make her own break Lieberman has appeared in over 30 international stage productions, has produced over 40 independent film and theatre productions and has helped over 100 creatives make their own break through her coaching and consulting work. She has penned a number of stage and screen plays and her short films have screened at the Festival de Cannes Court Métrage among other international festivals. She is currently gearing up to direct her first feature film. We had a wonderful conversation and I hope you feel empowered afterwards!

You can find the full episode by clicking the image: 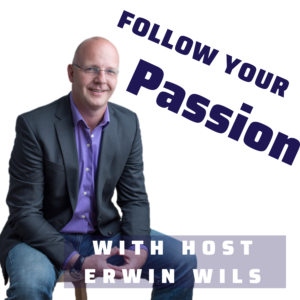 Or when you prefer visuals, check out the youtube version:

Erwin Wils is the founder of Millionaire Life Strategy. His mission is to help everybody reach their full potential. He is a mindset coach and business strategist and empowers you to become the person that achieves your goals, and beyond. With over 20 years experience in the corporate world and a very solid knowledge of hypnotherapy, he has all the skills and tools to transform you to your best version.

Follow your Passion episode 43 – Until you do it you don’t know it’s 100 percent possible, Lewis Schenk

Follow your Passion episode 42 – Every time I did something for the money, Tiffany Grant